Tony May, from Hastings Town Magazine makes up with Paul Crosland 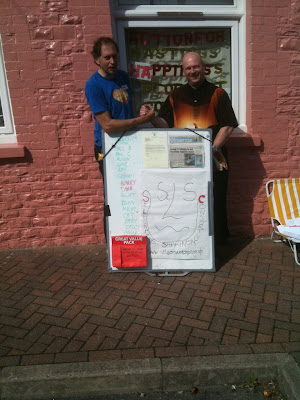 After the stuff written about me in the August edition of Hastings Town magazine; setting me up as Tony's antithesis, we find common ground & build a strong connection for sharing the future.
"I had a cracking good day at this years celebrations and met up with some very interesting characters, not least Hastings very own ambassador for 'Hastinggs Happiness'- Paul Crosland. There has been quite a lot in the local press lately about Mr Crosland and his 'Action for Happiness' organisation and with things the way they are at the moment God knows the country needs someone or something to put a smile back on our faces!
I came across Paul in the midst of setting up his 'Happiness Tent' amongst a line of stalls along †he seafront near the pier.
The tent itself was MASSIVE and Paul and his lady assistant appeared to have quite a job on their hands to get the thing up and so I chipped-in and gave them a hand.
Now, to anyone who knows the pair of us, Paul and I are about as poles apart in the way we see the world as you can get. He is Mr. Positive and I am The King of Negativity by nature. In fact I often joke with people that the singer, Morrissey (known for his doom and gloom) calls me whenever he is shocked to find himself in a good mood.  Obviously, the great man 'doesn't do happiness' and so a quick phone call to listen to my news and political views is obviously the order of the day. Suitably frustrated, angry and depressed once more - our 'Mozzer' puts the receiver down as 'unhappy as Larry' again!
Bearing this in mind, you can imagine how I laughed when Paul draped one of his natty blue 'Happy? Hastings 4 Happiness' t-shirts over me and took my photo! What credibility will the poor chap have left if word of my involvement with the project gets out, I wonder?
No, seriously, I have met Paul on a number of occasions before and I think he sees 'an old reprobate' like me as the  ultimate challenge. He is a man full of innovative ideas and someone who believes that life for all of us really could be as idealistic as we would like it to be. As miserable an 'old git' as I am, I sincerely wish him luck in achieving the goals he has set for himself and others."
Posted by Paul Crosland at 14:35

Having graduated from Happiness 101 you become eligible to attend planning meetings for Hastings & St Leonards Action for Happiness and receive mailings from the rest of the group.